Watch out these top 10 Mobile App Development frameworks for 2019

As with time, the number of mobile platforms is increasing, it could be a hard choice for developers to choose the best suitable framework for their project. Previously, there used to be a few mobile app development frameworks in comparison to today, where there are numerous app development frameworks. So, we have provided a list of Top Mobile App Development Frameworks that developers can choose for their app-based business.

React Native is one of the most in-demand cross platform frameworks that was launched by Facebook. There is a growing demand for using React Native to develop mobile apps. It is a JavaScript library which is useful in developing user interfaces and mainly focuses on the view part of your app. React Native covers Facebook and ReactJS UI library for web applications. It carries out the efficient performance of an app, DOM abstractions and makes programming simple for hybrid app development. 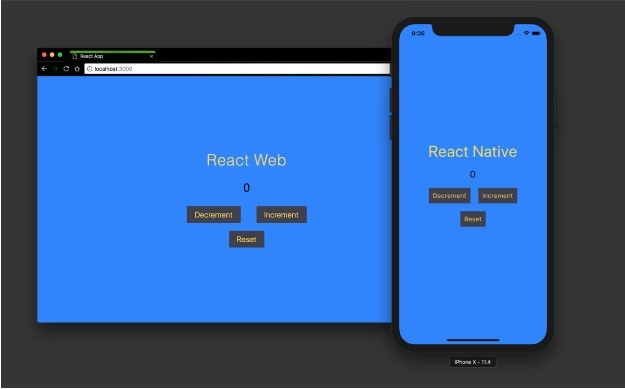 React Native offers a wide range of API interaction with native elements and provides an opportunity to write your own native modules or use ready-to-use modules of third party developers. Apps can also be updated anytime using ReactJS library. React Native is used popularly for hybrid app development due to various benefits it offers like focused UI, high portability, reusability of code, compatibility for third party integration and enhancement of efficiency of developers.

Ionic, a popular framework that is widely employed for the development of mobile apps, is a client side framework that helps in building native based apps with a combination of HTML, CSS3 and JavaScript. It also offers an added advantage of working with powerful SDK called Angular, and hence is popular among Angular developers for building native like mobile apps to work across iOS and Android platforms. Developers also have the provision to download projects and templates that were developed by other developers, at the Ionic online marketplace.

The JS and CSS features embedded in Angular will allow developers to customize app with different menus, buttons, color schemes, etc. The framework has high standards regarding the UI and provides with a lot of options in this area. The element of HTML5 assists to build hybrid apps too. Ionic framework is regarded as one of the best assets for developing Progressive Web Apps and also supports the latest mobile devices.

Xamarin is a cross platform development tool that allows developers to build native Android, Windows and iOS apps, using a shared C# codebase, hence saving a considerable amount of time for developers. It works on the WORA- write once, run any model. Xamarin allows you to use the same IDE, APIs and language everywhere and even offers the provision to do anything in C# that can be done in Swift, Objective-C or Java. 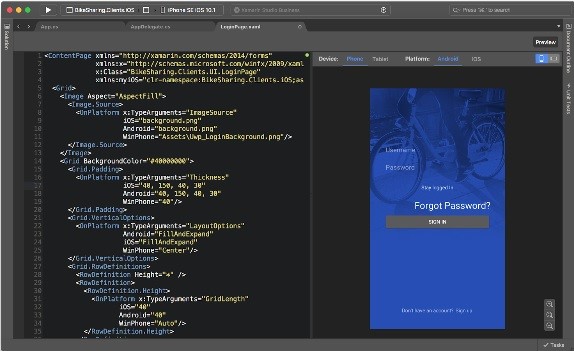 With Xamarin, apps can be tested on numerous devices with the help of company’s cloud service. Xamarin provides native look and feel, ability to reuse code, fewer bugs and also has a huge community. 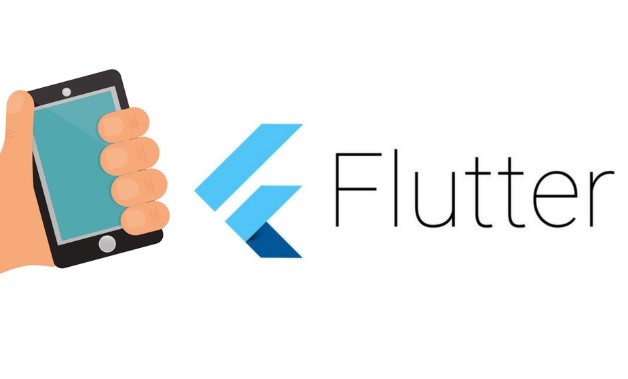 Flutter framework makes it easy to craft high quality native interfaces for both iOS and Android platforms and it helps developers by decreasing the amount of code required to update and synchronize the app’s view. Flutter makes use of Skia, which is a 2D rendering engine, to develop the visuals resembling the Cupertino style and Material Design widgets. Some cons of flutter include continuous integration, limited libraries and limited TV support.

The Mobile Angular UI combines the implementation of Bootstrap and Angular framework, and allows developers to use robust libraries like overthrow.js and fastclick.js to offer a smooth, seamless mobile experience. The process of development is simplified using this framework and apps can be built using HTML5.

Mobile Angular UI has certain mobile components like NavBars, sidebars that come with absolute positioning, switches, overlays and scrollable areas. Developers who are aware of Twitter Bootstrap and AngularJS, can convert web application into mobile version with ease by adding a CSS file in this framework.

PhoneGap is yet again a cross-platform app development framework, which enables apps to be developed in JavaScript, HTML5 and CSS. Some features of this amazing platform are multiple platform compatibility, ease of development, extensive architecture, rapid app testing and deployment.

It is extensively used to develop hybrid apps today, as it offers best in-class performance and the leverage to add more functionality with the addition of plugins. For mobile applications that don’t make the best use of phone’s native features, PhoneGap is the best option. PhoneGap enables developers to create iOS and Android Apps in the cloud without the need of local SDKs, which means that a non-Mac user can develop iOS based applications using Apache PhoneGap.

Sencha is another popular tool among app developers and offers a wide range of products like Sencha IDE Plugins, Sencha Architect and few others, with Sencha Ext JS 6 being one of the popular and best tools amongst the cross platform app developers. Sencha has ready to use tools for all platforms like iOS, Windows, Blackberry and Android.

Sencha also offers drag and drop option for visual app builder, which eases the development work. Sencha allows developers to code in HTML5 format, which can be easily used on Android and other devices, with the help of code translator tool like PhoneGap.

Corona is a cross platform mobile App development tool that is specially optimized for 2D gaming graphics, which is supported by Lua and HTML programming languages. It offers SDK to build game apps for Android and iOS devices with few lines of code. Some features of this platform include single code base, dominant APIs, more emphasis on design and a huge community. 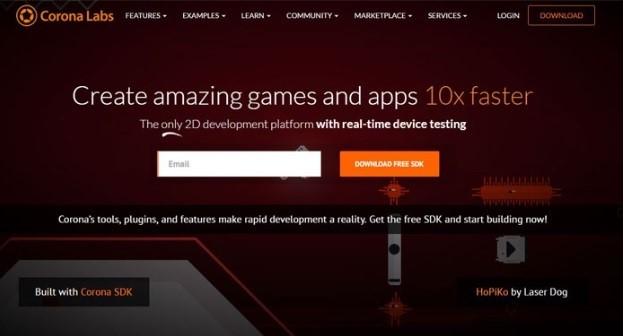 It helps make games 10 times faster as compared to time it would take to code everything from scratch. Apart from Corona being free and possessing ability to support Windows and Mac OS, another beneficial factor is that it is supported by Lua which is a lightweight programming language and offers speed, flexibility and ease of usage to develop apps.

JQuery is an HTML5 framework that is used for mobile app development. JQuery has simplified the way in which JavaScript is written. It is light weight, easier to learn, has a large development community and offers a wide range of plugins.

It even runs in a variety of operating systems like BlackBerry, iOS, Windows, Android, as well as Kindle, MeeGo and Nook. jQuery can be downloaded either as a custom download or the latest stable version, and it proves to be ideal choice when there arises need for rapid app development with plugins that come with the app.

Intel XDK is a highly rated cross-platform mobile app development framework for every app store which helps in creating meaningful apps with the help of plugins, responsive apps, interactive apps and web services for any device. With this framework, interactive and highly responsive apps can be developed for all devices.

Apart from app development, this framework makes the task of testing, emulation and debugging easier, and also supports popular framework like Node.js and futuristic technologies like Internet of Things(IoT). The Intel XDK framework also provides the option of drag and drop to develop the apps without the need to write long-winded codes and users have the advantage of previewing their project live if they were to make any changes.

Appcelerator is an open source development platform and uses a mix of both Xamarin and PhoneGap. It is based on JavaScript and allows development of native apps for Android and iOS platforms. Some great features of this framework include rapid prototyping, large and growing development community and web-orientation.

The appcelerator environment is extensible and open, and is an excellent choice for web development when it comes to provisions for Backend-as-a-Service (BaaS), app analytics, and much more. It is used with Titanium Studio which comes with its own platform-independent APIs and its own Titanium SDK.

Royex is a leading Website Design Company in Dubai that can help build your business presence on the internet. We offer professional web design and development services to add value to your business. Our passionate, creative, and devoted web development team combines quality UI/UX designs with effective web solutions. If you want to get your own website for your business please feel free to contact us at info@royex.net or call us at +971-56-6027916

Royex Technologies
Hello #Nobel, We have already wrote on this topic,. You may visit our link from here : https://www.royex.ae/blog/benefits-of-using-react-native-for-hybrid-mobile-app-development
3/14/2019 6:42:22 AM
Nobel
Do you have any article on react native? Please write on this topic. It will be great
3/14/2019 6:34:26 AM

Paytm is an ecommerce payment app. In this article, we will cover the development cost of a payment app like Paytm.

In this article, you will know about the development cost of a finance comparison app like Yallcompare. The cost to develop an app like Yallacompare ...

Development Cost of a Real Estate App Like fam Pro...

Real estate software has seen a great spike in its usage recently. What is the development cost of a real estate app like fam properties? Find the an...

Calm is one of the most popular meditation app in the market. This article will cover the development process and the cost required to develop a medi...

The Development Cost of an On-demand Delivery App ...

NowNow is an on-demand delivery app that is serving to customers in the UAE. The development cost of an app like NowNow ranges from AED..

How Much Does It Cost To Develop a Car-selling App...

SellAnyCar mobile app has made it easier to sell a car online. In this article, we break down the development cost of a car selling app in Dubai like...