Amazon Web Services (AWS) is innovative in its ability to help companies scale their applications and infrastructure dynamically. Furthermore, they were great at baking safety features into their offerings. While taking responsibility for protecting their infrastructure, AWS makes it clear that it is up to customers to guarantee that AWS services are tailored to security practices. They have offered a lot of policies to make that feasible.

Royex Technologies is one of the most trustworthy and well-established that uses AWS cloud protection services to integrate all of its technology platforms and do its best to ensure client's  trust and brand value in Dubai's IT arena.

AWS takes automated security very seriously and offers tools for administrators to ensure that their AWS architectures are as healthy as possible. One of AWS security stack's greatest benefits is the flexibility of deployment. For many instances, subscribing to the Service is a straightforward matter.

Here are a few of the available AWS devices.

GuardDuty is the Watchman on the Tower. GuardDuty is a simple-to-deploy managed threat monitoring program, and it scales with your infrastructure. These will review records from all of your accounts and programs, ensuring nothing is left unprotected. Amazon says GuardDuty analyzes tens of billions of events through AWS — and leverages machine learning to ensure reliable and actionable warnings are received. Very few other businesses can boast that sort of data collection.

GuardDuty is capable of detecting intrusion, instance compromise and account compromise activities. This involves items like port inspection, exfiltration of data, malware, suspicious calls to an API and attempts to prevent logging.

You can not write your own custom notifications for GuardDuty because AWS claims that it is intended to be a "hands off" device.

Nevertheless, it can automate warning remediation via AWS Lambda, and integrate into CloudWatch to ensure administrators have a single glass screen.

The conclusion: Guard Duty checks the logs and you don't need to.

AWS Shield is a DDoS security service which is managed to prevent any directory attack. Shield will secure resources from the EC2, Load balancers, CloudFront, Global Accelerator, and Route 53. Although DDoS security may not seem groundbreaking, remember that Amazon reports that CloudFront mitigates 99 per cent of all shield-detected network flood attacks in less than a second.

Attacks are often planned simply to discourage an organization from doing business. It can be a significant competitive advantage to have a tool which allows you to stay up without engaging your security teams. Also websites which are not hosted within AWS can be covered by AWS shield.

The conclusion: AWS Shield holds the services at an unbeatable rate of success. 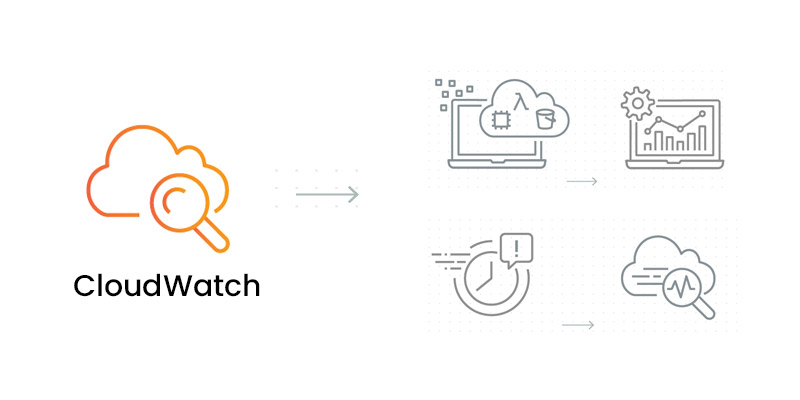 CloudWatch is the platform for tracking the AWS resources, well, everything. CloudWatch ingests reports, activities, and factors through your AWS network to ensure that you are able to see all that is happening in your system.

As everyone who has worked a SIEM knows, it is important to have a device which can collect a lot of data and make it available to engineers. Since CloudWatch interacts with GuardDuty, which can provide massive quantities of surrounding information, security issues can also be easier to fix.

CloudWatch also aggregates data on performance and resource usage, in addition to its security applications. This can be used to set up auto scaling for EC2 instances to automatically add or delete computing resources to ensure that companies get the maximum value from their AWS services spending.

The conclusion: CloudWatch offers insight in log events and other security resources with a single class window.

Macie is all about data security. This is a machine learning tool that tracks dynamics in data access and discovers anomalies in detecting data security issues and unauthorized access to data. It can send all of its notifications to Cloudwatch to take full advantage of the automation and custom warning. It is an entirely operated operation. It is also good to be able to add more visibility and warning without any more effort. At present, it only supports control of buckets from S3.

This appears to be an easy service but it can be extremely critical to detect vulnerabilities and rapidly recognize unauthorized data access or data exfiltration.

In 2017, Uber reported having a breach which affected 57 million of its users 'personal information. The intrusion was not a product of an AWS protection misconfiguration or malfunction, but a hacker who accessed a private GitHub folder who held its AWS credentials. Uber charged $100,000 to the hackers to keep the attack secret, before Uber eventually disclosed it to the media. If the attackers approached Uber or Uber observed the attack on their own is unclear but this is an important example of Macie's value proposition.

The conclusion: Macie gives you an indication of how your data is compromised.

Being cautious is always good. AWS Inspector is a security review tool that conducts vulnerability testing and best practices for AWS applications. The best thing about AWS Inspector is that administrators get instant updates, as the AWS security team keeps reviewing strategies regularly. Developing compliance with security and standards in infrastructure and delivery of applications gives companies a huge head start to stay secure.

The conclusion: AWS inspector is up to date at all times.

Since AWS is a fortress for DevOps geeks, it's no surprise that third party applications are some of the strongest security tools. Scoutsuite and Prowler are two of the best compliance and configuration scanners which the open source community has created.

Prowler depicts itself as an AWS Security method for reviewing, auditing, tightening and preparation forensics best practices. It has 89 pages spaning configuration areas such as access control and networking, as well as GDPR and HIPAA-related configurations.

The conclusion: Prowler has detailed references to it.

Scoutsuite is an assessment tool, The major distinguishing feature between these tools is the multi-platform facilities of Scoutsuite. It supports AWS, Azure, Microsoft, and the Google Cloud Platform.

Although auditing tools may not be as exciting as some of the other tools on the list, they can not be overstated in their importance. Many of the worst AWS data breaches are attributed to basic misconfigurations. Connection to AWS S3 buckets by public read / write has been responsible for epic-scale data breaches.

Accenture, a multinational consulting company, accidentally left four bins of S3 publicly available in 2017. A safety investigator found the buckets and alerted the company. The next day the buckets were guarded in a demonstration of just how easy it would have been to avoid this. 137Gb of bucket data, including plaintext client passwords, AWS credentials, and other cloud services, decryption keys, certificates, etc. have been registered. Unless the data had been accessed by a malicious intruder, the harm they could have done to Accenture and her clients could have been devastating.

The size of these breaches shows how critical an auditing tool could be to safeguard your data.

The conclusion: Start on a strong foundation of defense.

AWS is all about scale — it's never been easier to grow quickly. Many companies are running their entire application in AWS, from a web front end, backend repositories, computing resources, and large data volumes. The simplicity of this scaling can also mean that massive, poorly designed and vulnerable deployments can be quickly built easily.

Our cloud security guidelines have evolved on the best practises which have been suggested and encouraged by AWS itself. We use the core capacities in security concerns as it matters about data and most importantly privacy. At Royex, we always look forward to instituting new security  technologies without compromising data integrity as we believe the more you conceal your identity the safer you are. For all AWS consulting and service, choose Royex. To get started, call for any inquiries at +971566027916 or mail at info@royex.net

Mobile Backend as a Service (MBaaS) is an emerging technology that provides developers with a platform to develop, deploy, and manage mobile applicat...

How Can You Use ChatGPT For Content Generation and...

One of the most exciting areas of AI research is natural language processing (NLP), which involves using computer programs to understand and generate...

How Can Businesses Automate Their Customer Service...

ChatGPT can be utilized to automate various processes and workflows within small businesses. The model can be trained on specific tasks or informatio...

Top 6 Use Cases of ChatGPT In Ecommerce

ChatGPT, the powerful language model created by OpenAI, has the potential to revolutionize the way ecommerce businesses approach content marketing. B...

How Companies Can Use ChatGPT To Leverage AI Capab...

ChatGPT is a powerful tool that can help companies to automate tasks, personalize customer interactions, and make better-informed decisions. It can b...

The Impact of ChatGPT on Businesses: Balancing AI ...

ChatGPT is a powerful tool that has the potential to revolutionize the way we access and consume information. However, businesses that rely heavily o...