Byju’s - The Learning App is an Indian edtech and online tutoring platform. It was founded by Byju Ravindran in 2011. In 9 years, it has managed to become the world’s most valued edtech company valued at $5.4 billion.

The Byju’s mobile app is available on both the Google Play store and the Apple App store. This app has become the forefront of mobile learning for students over India and from other countries.

From humble beginnings to being a billion dollar company, to having Shah Rukh Khan as brand ambassador, Byju’s has had a meteoric rise and in this article, we will tell you it’s success story.

The brainchild responsible for Byju is none other than Byju Ravindran. He was a service engineer working overseas. During his two month break from the job in 2003, he came to India. During this time, he helped a few of his friends to prepare for the CAT exam.

From there, he started teaching and helping students to crack the CAT exam. Thus began his entrepreneurial journey where he would teach up to 1000 students in 2007. Due to his innovative and out-of-the-box teaching methods, he would get popular soon enough.

He began teaching in 9 cities traveling back and forth until 2009. That would change in 2011 when he would start his company, Byju's, where he took 4 years to prepare teaching material for students from grade 4 to grade 12.

The main teaching medium was via online videos keeping up with the shift in technological trends. From online videos, the platform changed to a mobile app format increasing the popularity even further.

The rest is history and the Byju’s app is the go-to platform for innovative and creative learning for math and science concepts. 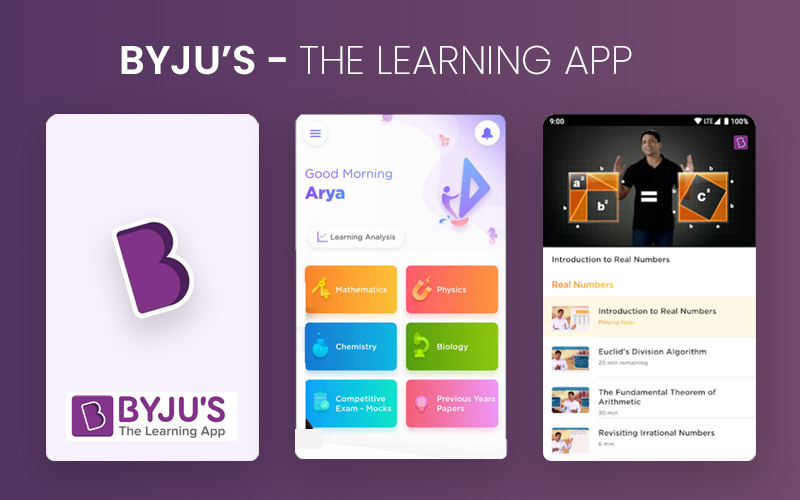 The Byju’s app was launched in August 2015 and is available on both Android and iOS. It runs on a freemium model. A freemium model is a mix of free and premium features integrated into one system. The first 15 days of usage are free and after that, you are charged a fee to use their platform.

The main theme around Byju’s app is using unconventional and creative methods to teach. It uses short animated videos to explain concepts in an easy way. The app is available in regional languages for different Indian languages. There’s also an international version for English speaking students.

Looking at some of the statistics, the app is rated 4.7+ in the app store, has 50+ million downloads, used by students from over 1700 cities, and students spend an average of 71 minutes on the app daily.

The first funding- the series A seed funding came from Aarin Capital in 2013. In the next round in 2015, it raised $25 million with fundings from Sequoia Capital.

In 2016, Byju raised over $50 million in four rounds of investments from Chan Zuckerberg Initiative, Innoven Capital, Sofina Group, Times Internet, and International Finance Corporation. During this time, the company was valued at $462 million.

In 2017, Verlininvest invested in Byju’s taking its evaluation upwards of $600 million. Later that year, Shah Rukh Khan became the brand ambassador for the company and the evaluation now stood at $800 million.

In 2018, Byju became the first edtech company in India to become a unicorn company when its evaluation crossed $1 billion. During this time, they received fundings from General Atlantic, Naspers, and Tencent.

2019 saw the Qatar Investment Authority and Owl Ventures investing a further $150 million. The company was reported to be valued at $5.7 billion. Byju Ravindran also became a billionaire and entered the Forbes Billionaires list.

Presently, in 2020, Byju is worth more than $8 billion with investments from General Atlantic and Tiger Global.  Byju’s earnings stand at $420 million at the end of March 2020.

All it took was a simple idea of taking the teaching from an offline environment to a mobile platform for Byju Ravindran to be a success story. If you too, can come up with a unique idea or present the solution to a problem through your mobile app, you could earn the next million dollar app.

Royex Technologies is a mobile app development company based in Dubai. We have worked with more than 300 clients globally since 2013. We have developed over 50 mobile apps of all kinds so we have the skill and expertise to deliver you a quality finished product that will grow your business. For more information please visit our website at www.royex.ae or call us now at +971566027916

Rajib Roy, CEO of Royex Technologies is a highly motivated, genuinely flexible and exceptionally hard-working person. He is a Systems Architect with a background encompassing a decade of experience in software development. Having played a key role in the development and deployment of projects and solutions that have been adopted by leading retail, hospitality and travel sector clients, his skills lie in planning cost-effective solutions and building and coordinating dedicated, highly-skilled teams that convert ideas and concepts into innovative, functional and ultimately profitable products.

With over 70% of the world's population owning a smartphone, it's clear that apps are the way of the future for mobile marketing. We'll explain how t...

9 Secret Techniques To Get Thousands of Downloads...

How can you stand out in an increasingly competitive market with your app? Here are some suggestions for increasing downloads and increasing engageme...

6 Things You Need To Know Before Starting Mobile A...

You've come to the right place if you want to establish a Mobile App Business. Because we'll show you exactly how to do it. Here are seven things to ...

10 Tricks To Get Crazy Ecommerce Traffic

Are you experiencing problems getting visitors to travel to your online store? We've gathered a list of top-notch techniques to attract traffic to yo...

Apple revealed updates to many of its operating systems, including iOS 15, during its annual Worldwide Developers Conference (June 7th-11th). Here's ...

7 Mistakes Every Ecommerce Owners Are Making

We've developed a list of the most frequent errors we see both rookie and expert eCommerce site owners and administrators make on a regular basis so ...