Animations for interfaces are an integral component of every digital product, application, or website. Think about how seldom you see an application or website that doesn't have at least one aspect of an animated interface. In this article, from a designer's point of view, we will explore why you need animations, what to remember when making them, and how to create animations for mobile apps.

How are animations used in mobile applications?

The improvement of usability is one of the key objectives of motion architecture. Animations in apps help users recognize similarities between items and views of the interface, provide users with input so they realize what's going on, explain the hierarchy between pages and displays, and draw attention to essential elements and functions.

The user interface and responsiveness were improved by bouncing lists, processing bars, hover effects, and touch effects. A user interface makes a well-thought-out motion design predictable, simple to monitor and navigate, quick and handy. In addition, it delights users and allows an unforgettable experience for your app. The way elements of the interface connect with each other and with the user dictates the ultimate understanding and experience of the user with your product.

The creation of animations and motion design falls at the final stage of the design process. There are five essential phases of app design prior to this: analysis, wireframing, prototyping, testing, and graphic design. These processes are iterative, but, depending on the criteria, they may be carried out in a certain sequence. Prototyping is the first phase in making animations of the mobile app user interface (UI), while certain concepts which arrive sooner during sketching or wireframing.

We create and evaluate our first concept at the prototyping stage and create sketches that we would later detail and polish, even for interactions (animations). Most frequently, at the prototyping level, the overall visual style is still not established. The key production of this stage is the basic layout of the page, which, if appropriate, can also alter during future iterations. That's why we generate so-called low-fidelity samples of interactions with limited information at the prototyping level. It saves time and encourages us to test more hypotheses.

After the overall visual style has been accepted and all UI displays are ready, the key portion of motion design occurs. For instance, we had to let users pick several objects while working on one of our projects and then show them in a basket so that users could see what they had already chosen and what was missing.

We then start digging for sources for a particular case after eliciting specifications and then sketch ideas with a pencil. We created the animation with the aid of Concept after we had checked each of these concepts.

What to consider when creating animations for mobile apps 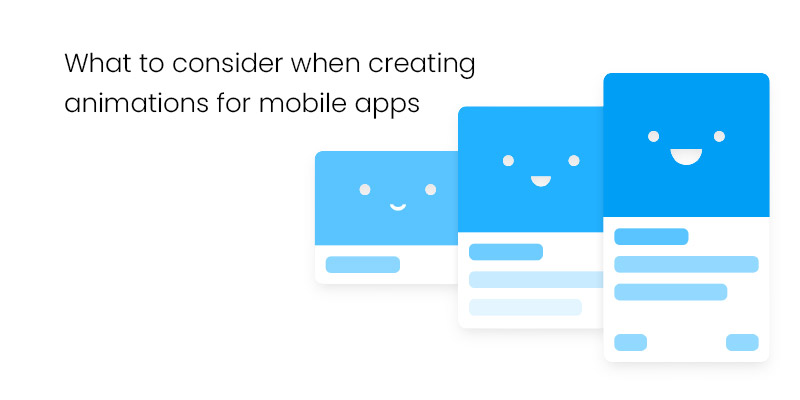 Here are the factors you need to consider when creating animations for mobile apps:

Adhere to mobile platform guidelines: You can always take note of existing mobile UI interface patterns when making animations, as well as the design requirements for the app for which you are developing. For eg, without any special analysis, you can build a successful motion design interface following the thorough recommendations of Material Design. In addition, for your customers, this interface would already be common.

Nevertheless, where remedies offered by guidance are inadequate and we need to build something different, we regularly face situations. In such instances, to look for ideas, we begin with a pencil and notebook. We invent gestures, connections with elements of the interface, and transformations on paper between those elements and then polish them later.

Cater to your target audience: For creating great experiences, the overall design and mood of animations as well as their relation to the brand are also significant. In certain situations, animations have to balance the core concept of the product and the intended audience's desires. If you make an app for children, for example, then vibrant colours, bounce effects, and animated characters are perfect ways to create an immersive environment and create the correct mood. Although such a playful strategy could be unacceptable in some situations.

Keep in mind about social and ethical norms: When you have double-checked everything and thought through every aspect of your animation design, there are tricky times, but there is always a minor detail that transforms into a major problem.

Taking into account not only technological requirements and accessibility, but also societal expectations when designing an interface and animations. Due to insensitivity, you certainly don't want to risk users.

Some animation tips for mobile apps 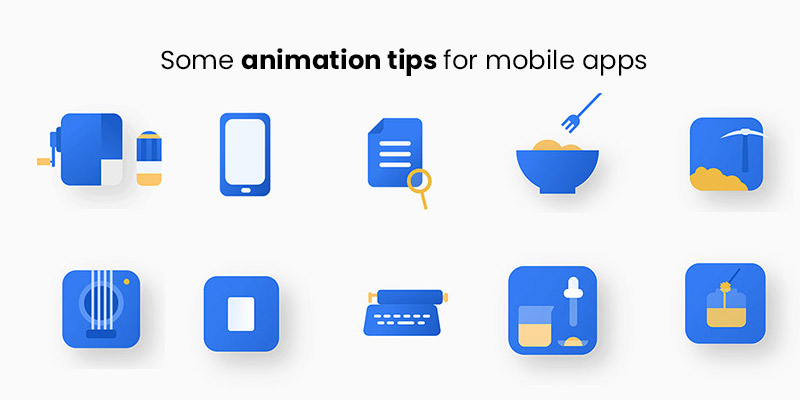 Here are some animation tips to keep in mind when designing animations for your mobile apps:

Layout preparation in prototyping tool: When making an animation for an approved UI with a ton of specifics and components, this is particularly relevant. Carefully arrange the components in your layout to simplify your more work: assign layers descriptive titles, organize layers into classes, get rid of redundant layers, and consolidate the components you are not going to animate into one or two properties. For starters, you don't need every list feature to be a separate layer, not to mention every icon and button, if you're creating an animation for scrolling content in a list.

Animation duration: Bear in mind that what you make is not a cartoon, but rather an interface, no matter how enjoyable it is to animate static mockups and play with bounce effects and splashes. Instead of enhancing it, if you misuse graphics, they can clutter your UX. Its length is one of the most significant aspects of an animation. Animations that are so lengthy, which nobody likes, make users wait. Pursue instructions and use your own sense of timing to determine the proper length.

Focus on important elements: It's definitely a smart idea to use color and position to draw users' attention to an essential element or elements in your app. But in addition to color and placement, you may render an aspect more important with animations. Consider incorporating an animation that raises the strength in terms of tempo, scale, or colour, based on how meaningful the aspect is. Don't go overboard, though. Otherwise, you risk annoying and distracting the users from the component.

Add context: If the menu extends right from the movement that creates it, it evolves from the stage where the action button is hit by the customer. This would enable users to realize what part of the app in which they have communicated.

Cascading effect: You should apply delays to the material while attempting to make the animation components appear like a waterfall. However, you don't have to apply delays to each single component; you can place the content in groups. A 20 millisecond split between the groups of elements is suggested by Google.

Interactive buttons: Buttons can provide users with visual input. For eg, from a call to action to a loading animation or even a splash to indicate that the interaction was successful, you may use the button container to create a button update. The point is to use the particular space in which users communicate.

Now you can see that it takes you to think a little more than ease and length to operate on a new animation. Be sure that you remain brand-consistent and test the animation to guarantee that the target group really likes it and profits from it.

Our works are known for their Functionality and Design. We Deliver what has been discussed and more. We are a group of experienced and skilled software architects, engineers and developers who will give you the perfect solution for any of your ideas.

Visit our Portfolio section to know the different projects we worked on from simple websites to complex websites plus applications. We set the client’s goals as our goals and set a timeline, and complete it on time.

We are here to give you the best and affordable prices that match your budget for your business profit. We are one of the best Mobile App Development Company in Dubai. You can drop a mail at info@royex.net or call on +971566027916.

How AI Can Improve The Functionality Of Taxi Booki...

The Role of Big Data in Inventory Management

When your business is all about selling tangible products, inventory management comes into play to make a big difference. Big data analysis can ease ...

AR enables users to try a product/filter virtually in real-time in a real-life setting. This technology has the potential to bring revolutionary chan...

Social media platforms are on the rise and when used to promote your mobile app, it can be a very powerful tool in making your app viral. The purp...

Yes, there are ways to get paid traffic, but SEO aims to help you get more organic traffic. It’s not easy to appear on the first page of search resul...

15 Creative Brand Design Ideas That Will Set the T...

In this era of the internet, your brand design is the first thing that can make a good impression on your audience. Many of the successful 2020 desi...