There is an increasing popularity of Mobile App Development which has paved way for software creation as a result of global support for smartphones and tablets.

At Royex Technologies, we provide the most high-performing hybrid app development solutions, which are sturdy and feature-packed. Besides, these hybrid app development solutions are not only scalable but also secure to the extent that they are capable of handling any business and IT sections.
We can help your company to build world-class hybrid mobile apps that will be highly attractive and beneficial to your end users.

1. It’s Got iOS And Android Covered

Facebook initially created React Native to support iOS. Recently, it has supported the Android operating system, making the library provide mobile UIs for both platforms. Facebook builds its own Ads Manager app using React Native. With this, it creates both of an Android and an iOS version. The similar team of developers is responsible for building both versions.
Besides, React Native open-source id developed by Facebook and this is compatible with stages like Windows or tvOS could be chipped away at by the advancement network.

The Web View components of other hybrid mobile apps don’t exist anymore since the React Native’s building blocks are reusable components that compile directly to native.

Every component in Android or iOS has partners directly in React, so you'll get a predictable feel and look.
Furthermore, with the component-based structure, you are able to build more agile and web-style approach apps than normal hybrid frameworks. However, this application contains no web, yet has look, speed, and usefulness of a native mobile application.

3. With an existing app’s code, apply React Native UI components—without any rewriting at all

Many businesses desire to increase a current app. However, they are reluctant to maintain it. The application of React Native UI components to an existing app’s code brings a huge benefit. Alternatively, if your current hybrid app was worked with Cordova and Ionic, reuse that Cordova-based code effectively with a module. 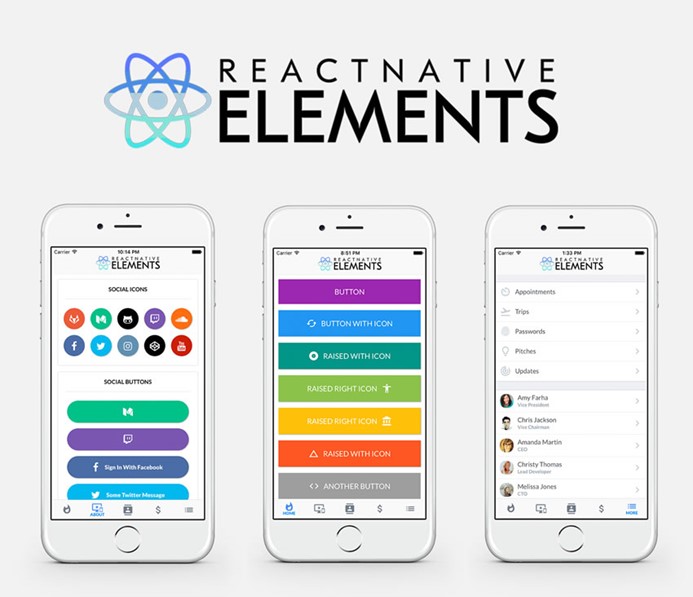 4. It’s One of The High Rank Mobile JavaScript Frameworks Among Developers- And Growing

React Native is a fast pick-up for someone that is very vast in JavaScript. It allows any front-end web developer to become an instant mobile developer. With the knowledge of platform APIs, some native UI elements, JavaScript, and some other stage explicit structure designs, you’re good to go because there is no need anymore to learn iOS’s Swift or Java for Android.

React Native’s library features the following apps: debugging, inline styling and Flexbox CSS styling. The library also supports deploying. These apps can be obtained either on Google play or the App Store.

React Native is still new. However, its rate of maturity is very rapid. In fact, Facebook has revealed plans to invest in its extension.

5. React Native Is All About The UI

Building a mobile UI is the principal aim of React Native. React Native is UI-focused. This is in comparison with JavaScript frameworks like MeteorJS or AngularJS. The UI really makes it more like a JavaScript library than a framework.
Besides, the resulting UI is highly responsive. With mobile UI, there is faster browse times and a smoother feel than a normal hybrid app.

Native app development is characterized by less developer efficiency and inefficiency. However, the speed and dexterity of web application advancement to the hybrid space.
Facebook’s popular ReactJS UI library for web applications is under React Native’s hood.
React Native features:

With Outsider modules mean you won't need to depend on a WebView for specific capacities. For instance, assuming you want to add Google Maps functionality to your app, React Native will assist you to link the module with a native plugin, to enable you link the map up with the device’s functions like rotate, compass and zoom, while using little memory and browsing faster. Older operating systems helps to keep the application running fluently, however, this will be possible if your app supports them.

There are diverse Mobile App tools you can choose; however, it is very tough to develop them. Besides, in order to reach the largest audience, it is very important for Mobile Apps to support multiple platforms. This is where the Hybrid app framework takes the position.

There is a wide gap between the performance of a native application and the ease of development of a web application. This is what Hybrid app frameworks have come to bridge. In fact, Hybrid Apps have won the hearts of so many app developers.

It is expected that very soon, Hybrid Apps will rule the application development industries across the globe. Obviously, it is a good choice for new developers.

Royex Technologies is a prominent Mobile App Development Company in Dubai. The company operates globally in the international market. Since we establish a bridge between international and local technology, we provide solutions that are fully interactive and cost-effective.
Our up-to-date service extends to numerous clients from UK, USA, Middle East and several countries too numerous to mention.

Royex Technologies is a Mobile App Development Company based in Dubai. We have worked with more than 300 clients globally since 2013. We have developed over 50 mobile apps of all kinds so we have the skill and expertise to deliver you a quality finished product that will grow your business. You can call us for details +971566027916

swim exercises to lose weight
My spouse and I stumbled over here by a different website and thought I should check things out. I like what I see so i am just following you. Look forward to exploring your web page repeatedly.
4/4/2021 12:30:27 PM
phim nhat ban dit nhau
Precisely what I was searching for, appreciate it for putting up.
2/22/2020 10:43:02 PM

This new Web is rapidly evolving into a more dynamic and rapidly changing environment, in which the democratization of action and knowledge may accel...

How To Develop A Cloud Kitchen Platform Like Kitop...

Cloud kitchen platforms are on-demand in Dubai as they are low-cost to start, optimized with a fast delivery experience, low overhead, highly custome...

A major component of effective product design is a mobile-first design. Designers may focus on the essential functionalities of their product by desi...

Ecommerce Trends That Will Shape The Ecommerce Ind...

UAE and Dubai have become a hub for ecommerce. The dependency on online shopping increased with the pandemic. From the reports, the apparel and footw...

2021 was a great year for us. We have done lots of great things with many remarkable achievements. In this article, we are going to talk about our ac...